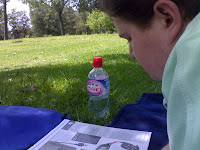 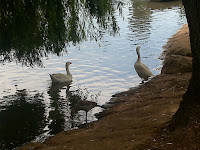 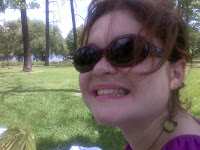 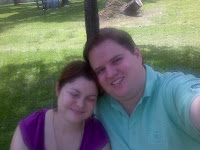 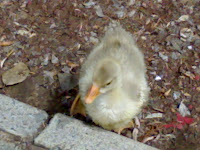 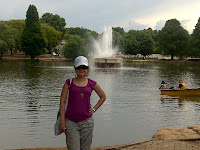 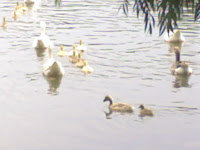 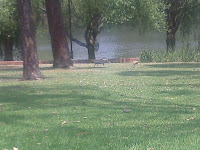 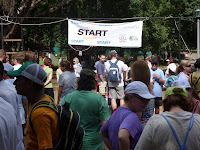 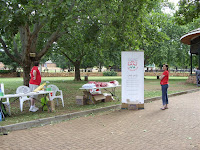 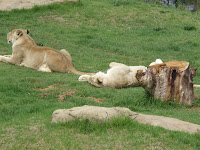 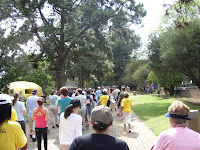 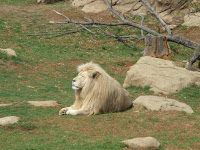 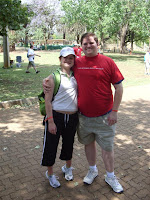 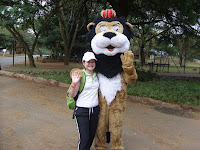 Posted by Alice Vogt at 8:44 PM No comments:

How's that for carefull planning?? I seriously though I had failed the exam, as it was REALLY tough, and almost had a heart attack when I saw the results... Am VERY relieved anf thankfull that I don't need to write it AGAIN.

My weekend was GREAT, Friday night we had th go-carts for team building @ work, I came 4th, and won the "crash&burn" award due to having the biggest crash! Still have big bruise on my arm! Was awesome though. On Sat morning Chris and I had a lovely picnic @ zoo lake for our 1 year anniversary, and afterwards went to see Jolandi. We also made some yummy ribs for supper and spend the rest of the day chilling. On Sun was the World's Biggest Walk, which was VERY successfull. Had to be there early as Chris and I were volunteering. IN the afternoon we went to a birthay party of friends of ours, and dropped by Jolandi again in the evening but she was sleeping so we didn't gt to see her. All in all the best weekend I've had in a while.

Jolandi's doing well. The lungs and everything are great, but unfortunately they damaged her vocal chord somewhere along the line, so she can't swallow food properly, and has a NG tube going down her nose to feed her now. Not sure how long this will have to be for, but shame, she's not impressed! Going to go see her after work today again.

This weekend should be good too... I'm doing a talk at the SA National Blood Services's annual medal presentation or something like that. Will post pics of the weekend tonight!
Posted by Alice Vogt at 7:54 AM 1 comment:

Hope that still gets to be 21 YEARS :-) How awesome would that be???? Week's been going well, FLEW past! Went to gym before work TWICE, pretty impressed with myself. Went to visit Jolandi twice (more about that later), had supper and some cocktail(s) with Chris and a friend, Cristy, which was great. Tonight my dad and I just cleaned the flat a bit, I prepared supper and now chilling a bit. Almost on my way to bath and bed!

Jolandi's been doing great, she had another small setback... due to air seeping into ger chest cavity through one of the holes where a drainage pipe used to be, her one lung colapsed and she had to get a draining pipe again :-( Oh well, at least it's not too serious. Was allowed with her in her room (out of ICU!) for the first time yesterday, so was great just to chat. Going for bloods again tomorrow morning, so will do an early morning pop-in!

This weekend's going to be BUSY :-D Tomorrow after work we're having work teambuilding: GO-CARTS!!!!! Yay, can't wait :-) On Sunday is the World's Biggest Walk, which is going to be at the JHB Zoo. It's going to be awesome, and looking forward to it a lot! On Sat Chris and I might celebrate our anniversary that we missed out on last week.

So there's some good stuff lined up, hope your weekend is a good one too! Will be posting some pics too next time, it's been a while!
Posted by Alice Vogt at 7:39 PM 2 comments:

Update on Jolandi and week...

Jolandi's been having a bit of a rough time :-( She was put back on the vent after being taken off it after less than 24 hrs after the op! Also, last night she coughed and a clip came out and bled. And her ears were ringing and she was sweating (that's the meds though, I had the same thing). But all in all doing OK, going to see her in an hour's time.

The rest of the filming went fine. On wednesday they did interview with my dad, me at work and squash. Being teased at work a bit, lol! The rest of the week was just rough work-wise, nothing else really.

To reply on a comment about still being on Prednisone after tx... unfortunately pred is one of the 3 anti-rejection drugs! I take a very low dose though, so I don't even notice I'm taking it. Pre-tx I was on 40mg a day most of the time, and now I'm on 7.5mg a day... the Prograf gives me much more hassles than poor old prednisone!

Getting ready to stop by the hosp now and then do a bit of shopping... so have a good weekend!!

I'm SOOOOOOO excited!!!!! Another (first for the year) CF woman had her transplant!!!!!! She's 31 years old, and I'm so happy another woman had a tx... The last one was ME, which was like 21 months ago, the rest were all guys... so I've been feeling rather alone in the whole tx setup here in SA. She's doing FANTASTICALLY... was off the vent in less than 24 hours after surgery, which must be like a record here!!! Can't wait to go visit... Going for bloods tomorrow morning, so might try and sneak into ICU (pretending to say hi to the nurses) to say hi to Jolandi instead!!!

So to answer more questions:


I still take Creon with meals, but because I'm not underweight/borderline-underweight, it's not a trainsmash if I miss a dose and not absorb all the nutrients. Although my tummy might be sore then...

My CF-related Diabetes got worse after tx (I was diagnosed with it a year before transplant), as a result of taking Prograf, which has high blood sugar as part of it's NUMEROUS side effects.

I have to be careful of the sun, as Prograf makes me more succeptable to skin cancer. I also have to take a pill for high BP because of the Prograf (well I had to when I started working full-time... all the stres, haha).

And related to the above mentioned, my risk for all cancers is basically increased, so have to do the regular gynae check-ups etc (have had some scares). Also bone density issues, but that was worse before tx, as my Prednisone dose was more than 4 times higher than now.

And I can't drink grapefruit juice anymore :-(, which used to be my favourite, lol.

But even taking all of that into account, it's still easier to deal with these issues than not being able to breathe.


My first 3 years of studying went fine... lungs were OK-ish, so tried not to park far from classes. Got my degree in the designated time. In my 4th year (trying to do honours), I became colonised with Pseudomonas, and things went downhill fast. Had to start using O2, lots more IV's, lung function crap etc. I couldn't finish my 4th year, and in 5th year I was listed for transplant, and did some pshycology and music subjects just to keep my busy. However if I couldn't find parking close to the lecture halls, I would just turn around and drive back home.

So that's it for now... Tomorrow is the last day of filming!! They'll be filming me at my work (blind!!!), then ask my dad some questions, then get some shots of me and Chris playing squash! Will be rather relieved when all of this is over, lol. Anyway, I'm getting ready for bed now... been a long day, didn't sleep well last night (thoughts were with Jolandi and my own transplants). Might take a Stilnox tonight. Have a good day/evening!!!
Posted by Alice Vogt at 6:54 PM 2 comments:

OK lots to catch up on! I'm so tired after spending half the day being filmed today for a TV show called The Power Within on SABC3 (will let you know exactly when it will be aired for anyone in SA that would like to watch...). Was dying of hunger afterwards, so went and got some drive-thu KFC :-) In half an hour's time Chris and I will be leaving again to go to Pretoria for a braai with the cousins! Staying over there too, and then tomorrow there will be some more filming and another braai @ Paul and Jenny's. Busy weekend!!!!

I received an e-mail a while ago about a sholarship for a Higher Education CF student:

" to celebrate the 17th year of the scholarship, this year's Thriving Student Achiever will be awarded $17,000! Voting starts today and ends October 15th, click here to vote"

So please check out the link and vote people. Solvay is the Co that produces the Creon I drink with meals... without it I would have lots of tummy ache and be very thin. (the latter sounds rather appealing post transplant though, lol) Either way, Creon is a big part of my life.

With ragards to the blog "game" I stole that seemed to fail, probably because I don't really keep anything secret, lol, Danielle, thanks for a VERY interesting question... I'm going to ask my Dr about it, but I would guess there wouldn't be a big difference in mutation between Eng and Afr people, as in the about 200 years that both Eng and Afr people have lived in SA, there's been so many mixing of the nationalities, I don't think anyone has no Eng blood in them or no Afr blood. I think most of us even have some black blood too ;-) But will def find out! Thanks!
Posted by Alice Vogt at 3:22 PM 3 comments:

Firstly, my exam on Friday was crap :-( Not very hopefull of passing... oh well, will just write it again. Takes 14 working days to get my results. Last week was extremely tough.... slept little, studied a lot, gymmed nothing, saw my friend Maryke whos waiting for lungs and was shocked to see her. Never seen anyone that sick in real life, and it broke my heart... it'll take a MASSIVE miracle to save her... generally just not a good week. Please pray for Maryke :-(

Weekend was a bit better, went to a comedy club on Friday night, which was a laugh and pretty good. Had a quiet Saturday and Chris and I had some friends over for a braai. Tried to catch up on some sleep.

Today I'm going to gym and having supper with Jenny, so week off to better start at least...

I've stolen this blog-idea from Emily.... ASK ME ANY QUESTIONS AND I'LL ASK THEM AS HONESTLY AS POSSIBLE!!!!

OK that's all for now... oh, and am going to be on TV here in SA sometime soon, will keep you posted. AND met Chris a year ago today.
Posted by Alice Vogt at 6:18 PM 2 comments: